Ah Monday! How was everyone's weekend? We had a pretty fun weekend here.

Friday I made homemade macaroni and cheese since it was rainy and cold out. Hubs and I were both exhausted that night. I think we were in bed by 9 or 9:30.

Saturday we got the guest room ready for my brother in law. He's going to be staying with us for a month or so. We also did some other chores around the house. Then my parents came over and Hubs and I got to have a date night!

I figured it would be nice to reconnect before his brother moves in. It is always nice to have a date night without the baby. Obviously we love and adore Chase but by the time he is in bed I'm pretty much half asleep myself.

Of course we ended up talking about work. I had an epiphany this week while playing with Chase. I was giving him kisses and making him giggle and I thought to myself that this is my job. No one else should be doing this. I know there are a lot of moms that aren't as lucky as I am to have the opportunity to stay home with their babies. I just can't imagine not being the one taking care of him right now. It was nice to hear Hubs agree that he doesn't understand how people can put their children in daycare at such a young age.

Having to put our future children in daycare right away is something I worry about. I just pray that I am able to have the time I have had with Chase with all of our children.

Sunday we had a birthday party to go to! Hub's cousin's son turned four this week! He and his brother were going to wear their spiderman costumes so she said the kids could wear whatever superhero costumes they had. Chase didn't have any but I found a spiderman shirt on clearance at Target! 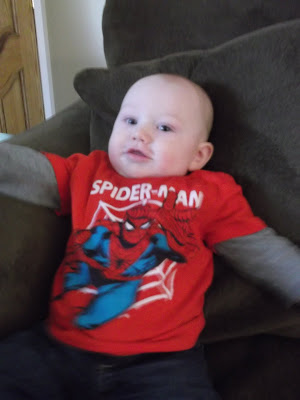 My little man ready for the party!
Chase had so much fun at the party! He ate his gerber green beans. I was excited he ate with all the people around. Remember the party was on Sunday so Hubs was planted on the couch watching football. Chase got to watch some too while I was eating.
They had a friend from church come and sing songs for the kids. It was so fun! He had drums and shakers for all the kids and I couldn't believe Chase tolerated the kids banging away on the drums. He normally gets scared by loud noises. He played the sweetest song that he called the cuddle song and I had to not listen to the words so I didn't cry!
We are really close with the birthday boy but I don't think he knew we were there until we said good bye to him! He was so busy playing with his friends. He of course wanted to open our present first because it had pez on it. I don't think he knows about the awesomeness that is the web shooter that we got him. I'm hoping we can go over Friday and play. 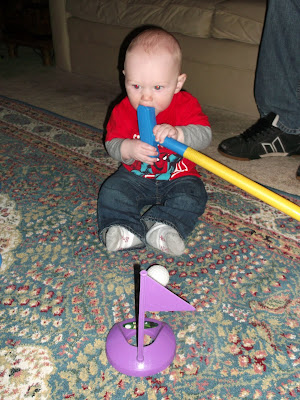 Look at the cool party favor we got! Chase is a little confused on how to golf. Love that little stinker!

Going to this party has me thinking about Chase's 1st bday. There weren't very many people at this party I think 23 rsvped yes and it was kind of crazy. I also need to come up with a cool party favor like this one! Chase's party is going to be sports themed.
Posted by Meagan at Monday, November 21, 2011 7 comments:

Some of my readers my not know this, but I have wanted to be a teacher since I was 12 years old. I had two amazing teachers in 6th grade that inspired me to pursue teaching as a career. Around this age I started babysitting kids in the neighborhood and thought it was good that I loved kids.

I spent 2 summers volunteering my time helping at a summer day camp. At age 15 I was hired to work as a day camp counselor. I decided in high school I wanted to attend the college where some of the best teachers I know went. I declared my major when I applied. Finished my BA in 4 years and was accepted to the teaching credential program.

Now I'm getting teary eyed. Thinking about how hard I worked. How many tears I shed.

In the state of California, after you work your ASS off getting your teaching credential, they hand you a lovely "preliminary credential". You have 5 years to get a teaching job to do another program to get a "clear credential".

May 2012 is 5 years from when I graduated. I have been a substitute teacher most of the time since I graduated, but the economy sucks right now and there aren't very many jobs. I've also moved 500 miles twice and had a baby.

I don't regret the choices I have made. I could have not moved to San Diego with Hubs and would probably have a teaching job now. I wouldn't have been happy without Hubs. I could have waited to get pregnant but I wouldn't have Chase. We all know he is the best thing I have ever done. I knew when I made these decisions that my dream of becoming a teacher might not come true.

Today I found out there is nothing I can do besides get a job to get a "clear credential". I was hoping to become an online teacher so I could have the best of both worlds. Be with Chase and teach. The online school doesn't offer the program to clear my credential.

My child loves to grab anything and everything. Especially hair. One time in college I chopped several inches off my hair as a surprise to now hubs and he was not amused. So I was in search of a shorter hair style that hubs approved. 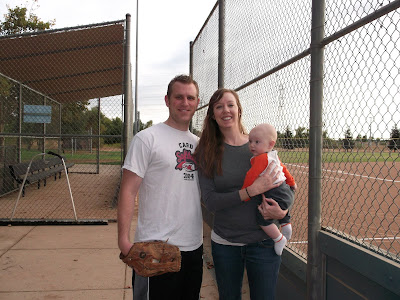 The hair before. Perfect length for Chase to get all tangled in. 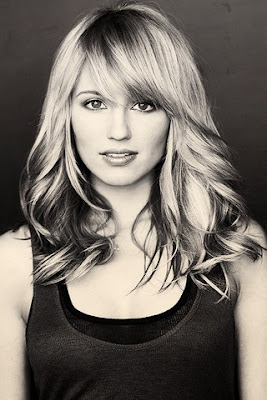 The cut Hubs approved and was used for inspiration for current hair. 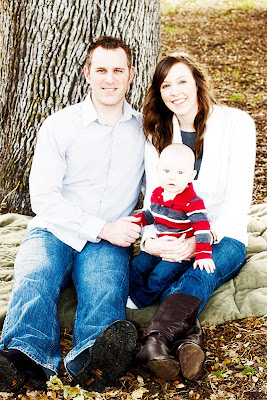 I am not so good at the hair doing. I got the cut but couldn't figure out how to make it look like the picture. I was going to straighten my hair for our family pictures. Then Chase had a bad night the night before our pictures. I woke up, took a shower, and got back in bed. My hair has natural wave to it if I let it air dry or get back in bed after a shower. So I ended up trying to recreate the picture. I was actually happy with my hair for the pictures and I think I did a pretty good job recreating it.

Can you believe not very many people even noticed I cut my hair? Probably because it is usually in a pony tail!
Posted by Meagan at Tuesday, November 15, 2011 6 comments:

The best candid picture from our photo shoot

Might have to get the biggest canvas they make of this picture. I am obsessed with it! Look at my baby sticking his tongue out at mommy and daddy! Love him!!!! 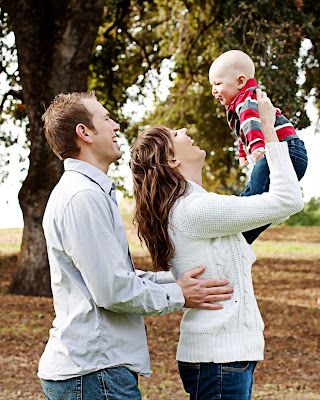 We got the go ahead to start feeding him solids. Since the rice cereal has slowed his poop down we are only going to do cereal once a day. We of course have to wait 3-4 days in between introducing new things. Once he's eating a few different things his doctor suggested doing two things like a cereal and fruit and then fruit and veggie. We will start out feeding him twice a day. His doctor and I would love to get him sleeping 8 hours a night!!! I feel like Chase puts himself to sleep, but I'm going to work on putting him in his crib drowsy just to make sure. He wakes up a lot, like usually 3 times a night, and he's getting too old for it.

His doctor was happy that we are trying to do 2 2 hour naps. Which is what she told us and a friend of mine he should be doing at 6 months. She said as long as he gets about 3 hours of napping in a day that's fine. She said don't wake him up after 2.5 hours, let him go 3 hours and realize that his 2nd nap will probably only be about 30 minutes.

Besides that stuff everything was great! Poor little man had to get 4 shots!
Posted by Meagan at Monday, November 07, 2011 5 comments:

Tomorrow is our Christmas card photoshoot! Help me pick my shoes!

Our photographer just had a cancellation for tomorrow morning so it is go time! I am really hoping it doesn't rain! So this is the last decision I need help with. What shoes should I wear? Hubs will be wearing his nice black shoes and since big foot has no shoes he will be in white socks. 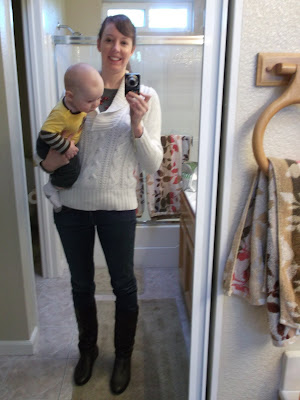 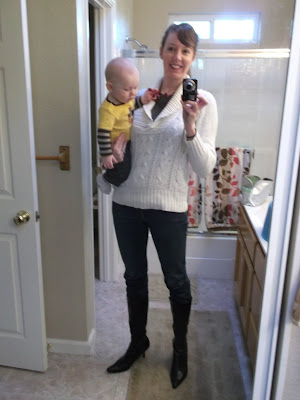 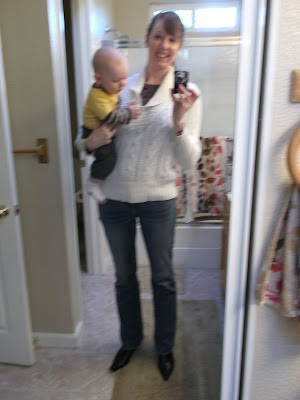 Thanks for all the fashion advice! Can't wait to see the pictures!!! Hopefully Chase does better than today!

Well, Chase is half a year old! It has gone by so fast! 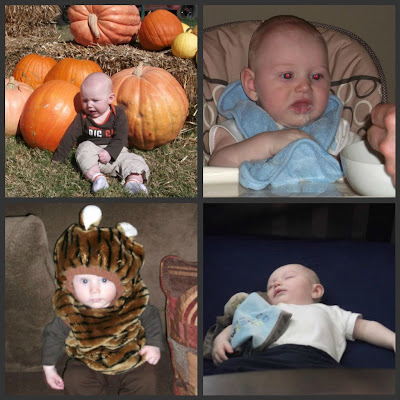 This month he started eating rice cereal. We went to a pumpkin patch. He finally started sleeping without a swaddle. He celebrated his first Halloween as a tiger! 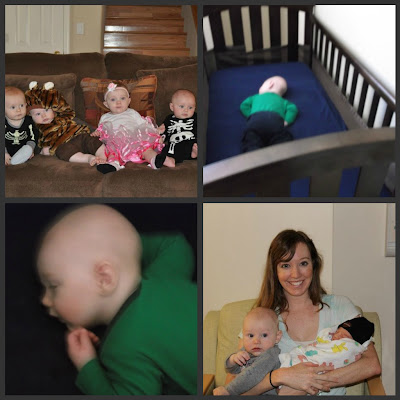 We had a Halloween party for his baby friends. All the boys except for Chase were skeletons. Isn't that funny! This month Chase not only started sleeping without his swaddle, he started sleeping on his tummy. Well, actually, his face! Scares me but what can you do? On the 2nd his bff arrived.

Chase started waking up 3 times at night this month. I think he's ready to be eating more solids. We will discuss with doctor on the 7th and probably start on the 8th! I couldn't believe Chase was the only one of his friends that hasn't started eating anything besides cereal. Chase has mastered rolling from belly to back this month. He is a rolling machine! He's also sitting up unassisted for several minutes. He drags objects toward himself. He's starting to get his knees up underneath him. I think most of his friends are saying dada. Chase makes more h and g noises. I think he's passing objects from hand to hand, but its kind of hard to tell. No teeth. I guess my mom and I were late with teeth. I really hope that doesn't mean he is going to need braces like me! I'm totally ok with teeth being late. I hear being bit is no fun!

He learned a lot in his 5th month and it was a really fun month! Can't wait for all that is up ahead!